Coronavirus, Mining and Latin America: A Baseless “Race to the Bottom” 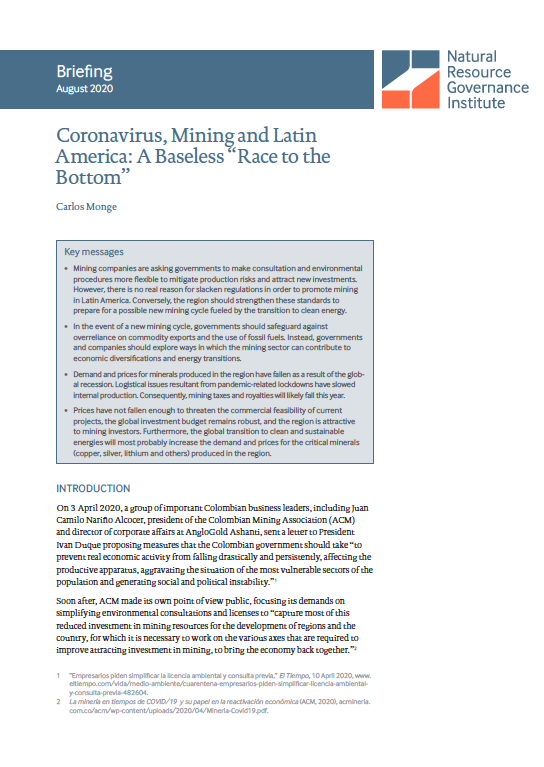 Key messages
Current investments are facing a temporarily lower demand and prices, and therefore providing lower returns on investments. However, none of these countries are at risk of having their minerals become “stranded assets,” (resources that have lost their value due to shifting global energy consumption). Businesses asking governments to ease environmental and social procedures have now focused on the need for greater investment in mining exploration. They have built a narrative that blames what they deem excessive procedures, particularly those related to consultations and environmental licenses, for the decline in investments in mining exploration in these countries.

Despite declining after their 2012 peak, exploration investments remained at higher levels than in the years prior to the super cycle, and higher even than in some years of the cycle itself. Latin American countries such as Chile, Peru, Mexico, Brazil, Argentina, Ecuador and Colombia are among those that were receiving the highest proportions of the world´s investments in mining exploration before the crisis.

Some companies may face short-term difficulties due to falling demand, prices and production challenges related to the internal and external shocks of the pandemic. As such, it may be reasonable for companies to ask for temporary measures, such as deferment of taxes or royalties for a few months. However, their demands for lower standards or permanent easing of environmental, social or fiscal procedures in the mining sector are not justified.

In addition to maintaining governance of the sector, countries should prepare themselves to effectively govern increased mining activity so that the sector contributes to environmental sustainability and socially inclusive diversification, instead of deepening our condition of commodity-led export economies highly dependent on volatile markets and concentrating productive job growth in limited sectors of the economy.