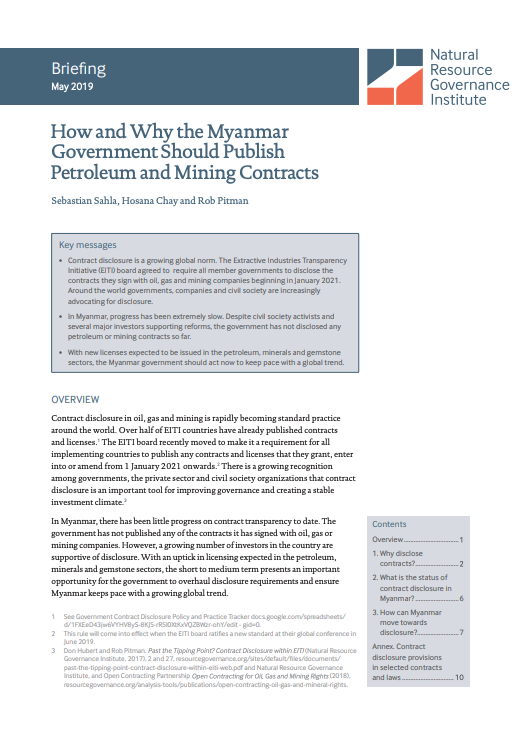 Contract disclosure in oil, gas and mining is rapidly becoming standard practice around the world. Over half of EITI countries have already published contracts and licenses. The EITI board recently moved to make it a requirement for all implementing countries to publish any contracts and licenses that they grant, enter into or amend from 1 January 2021 onwards. There is a growing recognition among governments, the private sector and civil society organizations that contract disclosure is an important tool for improving governance and creating a stable investment climate.

In Myanmar, there has been little progress on contract transparency to date. The government has not published any of the contracts it has signed with oil, gas or mining companies. However, a growing number of investors in the country are supportive of disclosure. With an uptick in licensing expected in the petroleum, minerals and gemstone sectors, the short to medium term presents an important opportunity for the government to overhaul disclosure requirements and ensure Myanmar keeps pace with a growing global trend.

Section 1 of this briefing explains the benefits of contract disclosure and dispels some of the common myths used to argue against it; Section 2 evaluates current legal requirements and practices in Myanmar; and Section 3 sets out a potential path towards disclosure.


Photo by Matt Grace for NRGI