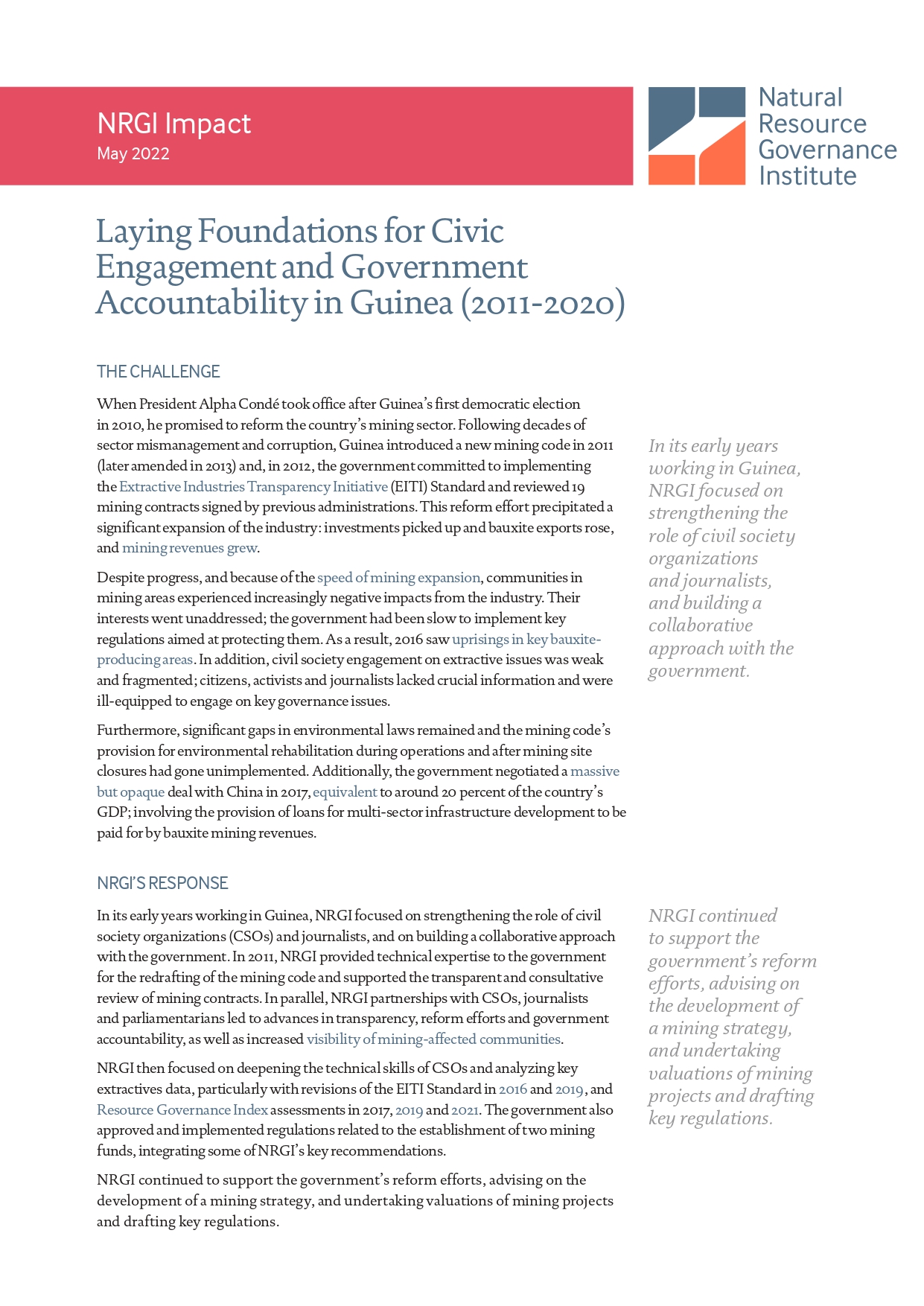 The challenge
When President Alpha Condé took office after Guinea’s first democratic election in 2010, he promised to reform the country’s mining sector. Following decades of sector mismanagement and corruption, Guinea introduced a new mining code in 2011 (later amended in 2013) and, in 2012, the government committed to implementing the Extractive Industries Transparency Initiative (EITI) Standard and reviewed 19 mining contracts signed by previous administrations. This reform effort precipitated a significant expansion of the industry: investments picked up and bauxite exports rose, and mining revenues grew.
Despite progress, and because of the speed of mining expansion, communities in mining areas experienced increasingly negative impacts from the industry. Their interests went unaddressed; the government had been slow to implement key regulations aimed at protecting them. As a result, 2016 saw uprisings in key bauxite-producing areas. In addition, civil society engagement on extractive issues was weak and fragmented; citizens, activists and journalists lacked crucial information and were ill-equipped to engage on key governance issues. Furthermore, significant gaps in environmental laws remained and the mining code’s provision for environmental rehabilitation during operations and after mining site closures had gone unimplemented. Additionally, the government negotiated a massive but opaque deal with China in 2017, equivalent to around 20 percent of the country’s GDP; involving the provision of loans for multi-sector infrastructure development to be paid for by bauxite mining revenues.
NRGI’s response
In its early years working in Guinea, NRGI focused on strengthening the role of civil society organizations (CSOs) and journalists, and on building a collaborative approach with the government. In 2011, NRGI provided technical expertise to the government for the redrafting of the mining code and supported the transparent and consultative review of mining contracts. In parallel, NRGI partnerships with CSOs, journalists and parliamentarians led to advances in transparency, reform efforts and government accountability, as well as increased visibility of mining-affected communities.
NRGI then focused on deepening the technical skills of CSOs and analyzing key extractives data, particularly with revisions of the EITI Standard in 2016 and 2019, and Resource Governance Index assessments in 2017, 2019 and 2021. The government also approved and implemented regulations related to the establishment of two mining funds, integrating some of NRGI’s key recommendations.
NRGI continued to support the government’s reform efforts, advising on the development of a mining strategy, and undertaking valuations of mining projects and drafting key regulations. When the minister of Mines and Geology upgraded Guinea’s existing contracts website in 2017, NRGI created the Guinea Resource Contracts platform and trained mining ministry administrators on making contracts more accessible.

NRGI further provided grant support, training and technical guidance to CSOs. Campaigners were able to track subnational payments to a host of bauxite- and gold-rich prefectures to assess the adequacy and use of transferred funds involving local communities.
Impact
Since 2011, CSOs in Guinea have contributed to unprecedented levels of transparency in the mining sector, held authorities accountable and successfully pushed for the issuance of key mining regulations. Mining governance has improved from “poor” in 2017 to “satisfactory” in 2021 and CSOs have grown in size and diversity. These include Action Mines, founded by a group of Guinean journalists who had attended NRGI training courses, and the Publish What You Pay Guinea coalition. Other key achievements in Guinea include:
Looking ahead
Over the last decade, CSOs in Guinea have become more effective. As the quality of reports and evidence has improved, the next steps involve ensuring that these tools are more rigorous and accessible, and that CSOs regularly engage with mining communities to amplify their voice in national debates. To build on progress made in its first decade working in Guinea, NRGI is supporting CSOs to set a coordinated agenda of governance reforms.


Photo by Igor Grochev via Shutterstock