Mexico: Initial Assessment of the Impact of the Coronavirus Pandemic on the Extractive Sector and Resource Governance 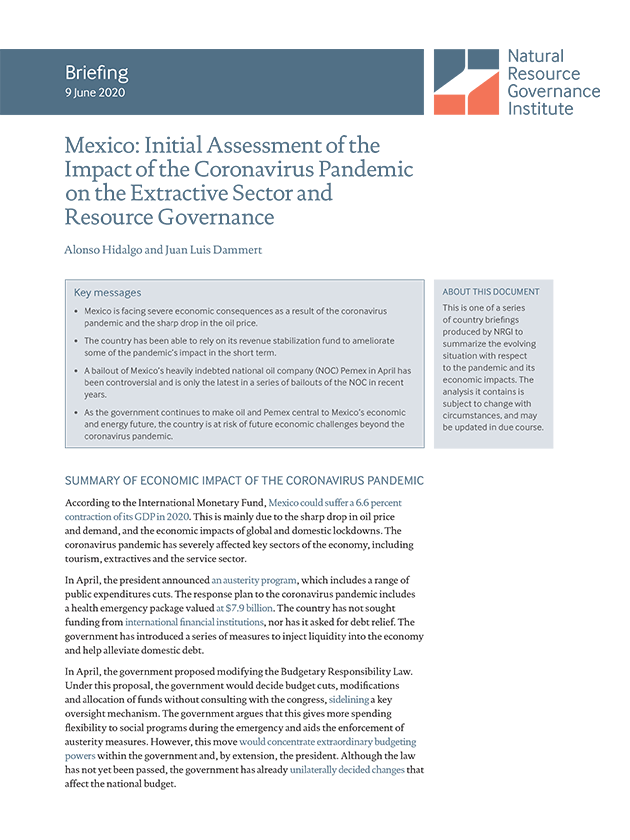 According to the International Monetary Fund, Mexico could suffer a 6.6 percent contraction of its GDP in 2020. This is mainly due to the sharp drop in oil price and demand, and the economic impacts of global and domestic lockdowns. The coronavirus pandemic has severely affected key sectors of the economy, including tourism, extractives and the service sector.

In April, the president announced an austerity program, which includes a range of public expenditures cuts. The response plan to the coronavirus pandemic includes a health emergency package valued at $7.9 billion. The country has not sought funding from international financial institutions, nor has it asked for debt relief. The government has introduced a series of measures to inject liquidity into the economy and help alleviate domestic debt.

In April, the government proposed modifying the Budgetary Responsibility Law. Under this proposal, the government would decide budget cuts, modifications and allocation of funds without consulting with the congress, sidelining a key oversight mechanism. The government argues that this gives more spending flexibility to social programs during the emergency and aids the enforcement of austerity measures. However, this move would concentrate extraordinary budgeting powers within the government and, by extension, the president. Although the law has not yet been passed, the government has already unilaterally decided changes that affect the national budget.

Mexico has been able to rely, to some degree, on its Budget Revenue Stabilization Fund (FEIP) and on its oil “hedge” program to lessen the negative impacts of the coronavirus pandemic and the oil price crash, at least in the short-term. Mexico’s oil hedge program is essentially an insurance policy. Under the hedge, the NOC, Pemex, expects to receive $49 per barrel in 2020, despite the price drop. However, the hedge can only insure price, not demand.

The government remains committed to growing Mexico’s oil sector despite the current price drop and other longer-term factors, including the impact of the global energy transition. The government’s economic agenda is deeply nationalistic. Its vision is that Pemex should secure energy sovereignty as well as providing revenues to sustain the government’s social programs and flagship projects. However, Pemex’s overall contribution to the Mexican economy has been dwindling for the last 10 years. In 2019, Pemex accounted for 6.6 percent of GDP, a drop from 10.8 percent in 2008. In 2020, we expect that number to decrease further. Moreover, Pemex is carrying substantial debt. In April, the government approved a $2.6 billion stimulus package for the company. This package aims to cut Pemex’s tax requirements with the state by 80 percent. This move is the latest in a series of bailouts of Pemex over the last few years.

The government hopes that Pemex’s creditors see this as a signal that the company will stick to its development plan despite uncertainty in the oil markets. In addition, the government is still pursuing flagship projects, including Pemex’s Dos Bocas refinery.

The government will also try to speed up Pemex’s associations with private partners in order to increase its exploration capacity and prepare for an intensive production phase once demand increases. However, the coronavirus pandemic, the oil price drop and global uncertainty around economic recovery will negatively affect private participation in Mexico’s oil sector. Private sector players will likely be more cautious in this environment.

As noted above, Mexico’s oil hedge program is a financial tool that gives Pemex flexibility to withstand price drops. The main problem for Pemex will be finding a market for its product. Although the government has stated that its top priority is internal consumption and energy sovereignty, as in the US, there are issues with oil storage and supply abundance.

Based on data submitted to the National Hydrocarbons Commission, the private sector planned to invest some $4.6 billion in 2020. However, 70 percent of private sector operations in the oil sector are in the exploration phase, meaning companies can easily postpone. Shortly before the crisis, Talos and Total stopped operations and returned their oil blocks to the Mexican government. The oil price and pandemic shocks will likely see more blocks returned in the coming months.

Unlike the oil sector, which is characterized by the government’s focus on strengthening the national oil company, mining is dominated by private investments. In April, the Mexican government suspended mining operations. The Mexican Mining Guild has pressured the government to make mining an essential activity (meaning operations can continue). They argue that mining is a core activity for the supply chains of sectors that will play a role in generating employment, such as car manufacturing, and flagship infrastructure projects such as Dos Bocas Refinery. On 25 May, mining sites were allowed to resume operations.

Pemex has already reported a loss of $23 billion in the first quarter of 2020. The oil price drop and coronavirus impacts are not the sole cause of these losses; they reflect wider challenges with the NOC, including its very sizable debt, estimated at more than $100 billion. As noted, Mexico’s oil hedge program gives Pemex flexibility to withstand price drops, but has limited impact when demand is also very low. According to the President, Mexico will get $6 billion from the hedge in 2020.

Since 2018, the government has used up to $5 billion from the Budget Revenue Stabilization Fund (FEIP), one of Mexico’s resource-based sovereign funds, to secure its large infrastructure projects (Dos Bocas, the Mayan Train and the Santa Lucía Airport). The FEIP is now seeing lower incoming revenues and the response to the coronavirus pandemic is further depleting it.

The government has announced that the Stabilization Fund for Federative Entities (FEIEF), another natural resource-based fund which it distributes between subnational entities, will not be able to cover the expected subnational transfers in 2020. According to Moody’s, this fund faces an 8 percent shortfall due to coronavirus impacts. This news comes as the coronavirus pandemic is expected to affect up to 80 percent of the income sources of subnational governments.

Revenues from private sector players in both oil and mining will also be severely reduced, impacting both government revenues and allocations to resource funds. As these funds require a return to higher oil prices to replenish savings, the country is facing potentially significant economic risks in the medium-to-long term.

The overall resource governance agenda in Mexico faces significant challenges because of the government’s approach to the oil sector, and Pemex specifically. In particular, the push given to the government’s flagship infrastructure projects in the middle of the pandemic raises concerns. Pemex’s outstanding debt, combined with production costs and the instability looming in the oil market, will significantly affect the government’s economic strategy at least in the short term, but potentially for longer. Beyond debt and production challenges, Pemex remains affected by recent corruption scandals, which may also impact the role of the NOC in Mexico’s economic future.

Since the beginning of the administration, the government has used “austerity measures” as an excuse to defund regulatory bodies, especially in the oil sector. The risk is that it is using the new austerity measures to further the dismantle internal controls. This issue requires careful monitoring.

The most significant resource governance issue facing Mexico is the government’s continued intention to make oil and Pemex central to Mexico’s economic and energy future. Not only is the government driving forward with substantial expenditure, it has recently moved to deepen Mexico’s reliance on fossil fuels, with the approval of new fracking projects and a freeze of all renewable energy contracts with private entities. From an energy policy perspective, the plan to keep Mexico fossil fuel reliant risks leaving Mexico with an outdated and polluting energy infrastructure, in addition to significant economic challenges in the decades to come. Changing course and moving away from the continued focus on Pemex is essential but requires a major shift in the political narrative in Mexico.

While the oil and Pemex issues loom largest, Mexico also faces further weakening of regulatory and oversight controls around petroleum. This could lead to the erosion of good governance gains that the country made in the past. Given the highly politicized nature of the narrative around oil and Pemex, it will require concerted civil society action to hold the line on standards.

Coronavirus, Oil and Latin America: The Urgency of Economic Diversification and Energy Transition