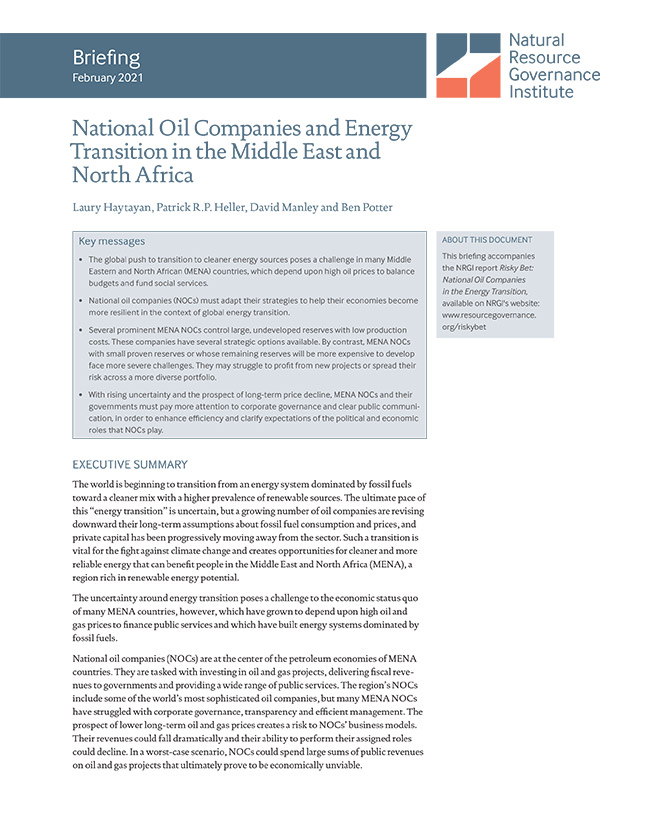 As the world looks toward an energy future that is less reliant on fossil fuels, governments in the Middle East and North Africa (MENA) region must adapt. The petroleum sector is a major employer in the region, the primary source of fiscal revenue, the dominant generator of exports and the source of energy that powers economies. With the pace of energy transition uncertain, a growing number of oil companies are revising downward their long-term assumptions about fossil fuel consumption and prices, and private capital has been progressively moving away from the sector. This transition creates opportunities for cleaner and more reliable energy for citizens in the MENA, a region rich in renewable energy potential.

This briefing derives from in-depth research and interviews on the challenges and reform plans of three MENA NOCs (Saudi Aramco, Qatar Petroleum and Algeria’s Sonatrach) and draws out implications for other NOCs in the region. The authors seek to inform the strategies of governments and NOCs on how to manage NOC portfolios and the evolution of state-NOC accountability mechanisms and hope that nongovernmental analysts and civil society organizations will use this briefing as a tool to help understand and scrutinize public reform plans.