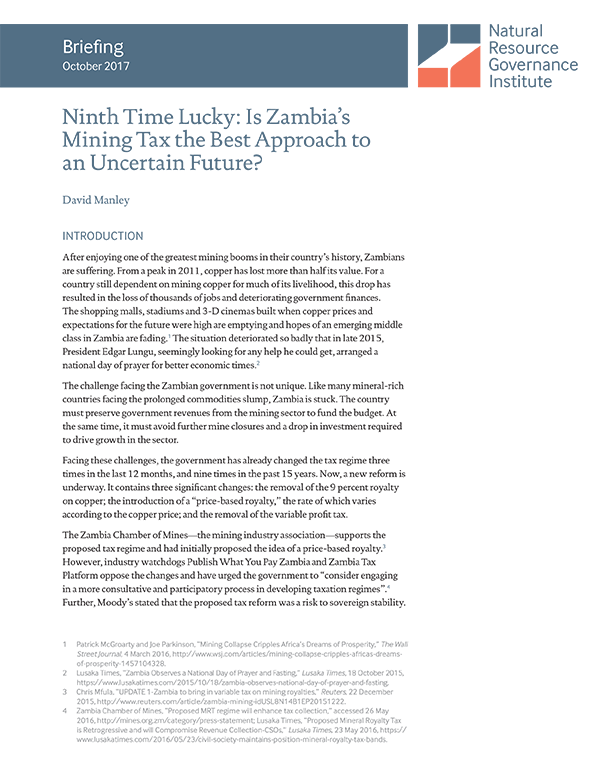 After enjoying one of the greatest mining booms in their country’s history, Zambians are suffering. From a peak in 2011, copper has lost more than half its value. For a country still dependent on mining copper for much of its livelihood, this drop has resulted in the loss of thousands of jobs and deteriorating government finances. The shopping malls, stadiums and 3-D cinemas built when copper prices and expectations for the future were high are emptying and hopes of an emerging middle class in Zambia are fading. The situation deteriorated so badly that in late 2015, President Edgar Lungu, seemingly looking for any help he could get, arranged a national day of prayer for better economic times.

The challenge facing the Zambian government is not unique. Like many mineral-rich countries facing the prolonged commodities slump, Zambia is stuck. The country must preserve government revenues from the mining sector to fund the budget. At the same time, it must avoid further mine closures and a drop in investment required to drive growth in the sector.

Facing these challenges, the government has already changed the tax regime three times in the last 12 months, and nine times in the past 15 years. Now, a new reform is underway. It contains three significant changes: the removal of the 9 percent royalty on copper; the introduction of a “price-based royalty,” the rate of which varies according to the copper price; and the removal of the variable profit tax.

The Zambia Chamber of Mines—the mining industry association—supports the proposed tax regime and had initially proposed the idea of a price-based royalty. However, industry watchdogs Publish What You Pay Zambia and Zambia Tax Platform oppose the changes and have urged the government to “consider engaging in a more consultative and participatory process in developing taxation regimes.”

Further, Moody’s stated that the proposed tax reform was a risk to sovereign stability.

This paper offers such an analysis and does so following the principles of open data.