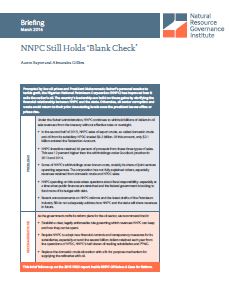 Author
Aaron SayneAlexandra Gillies
Download
NNPC Still Holds Blank Check (PDF 229.87 KB)
Note Regarding the NRGI Briefing NNPC Still Holds Blank Check (PDF 712.58 KB)
Topics
Revenue managementState-owned enterprises
Countries
Nigeria
Social Sharing
UPDATE (25 April 2016): After the original publication of this briefing on 30 March 2016, NNPC invited NRGI to several meetings and sent written replies in which it disputed some of our findings. Following these engagements, which NRGI welcomed, we have released a note that reiterates our main messages and responds to points raised by NNPC. We also updated one set of figures in the briefing; this revision did not alter the main findings.

New analysis from NRGI shows that the Nigerian National Petroleum Corporation (NNPC) continues to retain billions of dollars in oil sale revenues from the treasury without effective rules or oversight. In the second half of 2015, NNPC sales of export crude, domestic crude and oil from its subsidiary NPDC totalled $6 billion. Of this amount, only $2.1 billion entered the Federation Account. As the government continues its reform of the oil sector, we recommend that it establish a clear, legally enforceable rule governing which revenues NNPC can keep and how they can be spent. Otherwise, oil sector corruption and waste could return to their prior devastating levels once the president leaves or prices rise.

This briefing follows up on the 2015 NRGI report Inside NNPC Oil Sales: A Case for Reform.

Ensuring a Fair Deal for Nigerians with Oil-Backed Loans