Transfer Pricing in the Extractive Sector in Tanzania 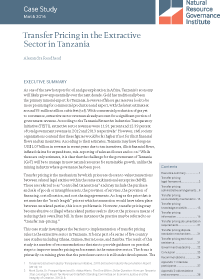 As one of the new hotspots for oil and gas exploration in Africa, Tanzania’s economy will likely grow exponentially over the next decade. Gold has traditionally been the primary mineral export for Tanzania, however offshore gas reserves look to be more promising for commercial production and export, with the latest estimate at around 55 million trillion cubic feet (tcf). With commercial production of gas yet to commence, extractive sector revenues already account for a significant portion of government revenue. According to the Tanzania Extractive Industries Transparency Initiative (TEITI), extractive sector revenues were 11.91 percent and 12.39 percent of total government revenue in 2012 and 2013 respectively. However, civil society organizations contend that these figures would be far higher if not for illicit financial flows and tax incentives. According to their estimates, Tanzania may have foregone US $1.07 billion in revenue in recent years due to tax incentives, illicit financial flows, inflated claims for expenditure, mis-reporting of sales and losses and so on. While these are only estimates, it is clear that the challenge for the government of Tanzania (GoT) will be to manage its new natural resources for sustainable growth, unlike the mining industry where governance has been poor.

Transfer pricing is the mechanism by which prices are chosen to value transactions between related legal entities within the same multinational enterprise (MNE). These are referred to as “controlled transactions” and may include the purchase and sale of goods or intangible assets, the provision of services, the provision of financing, cost allocation, and cost sharing agreements. As long as the price that is set matches the “arm’s length” price at which a transaction would have taken place between unrelated parties, this is not problematic. However, transfer pricing may become abusive or illegal when related parties seek to distort the price as a means of reducing their overall tax bill. In these instances the practice may be referred to as “transfer mis-pricing.”

This case study investigates the barriers to implementation of transfer pricing rules in the extractive sector in Tanzania. Tanzania and Statoil: What Does the Leaked Agreement Mean for Citizens?

'Preventing Tax Base Erosion In Africa' Paper Launch at Oxford