Tunisia: Initial Assessment of the Impact of the Coronavirus Pandemic on the Extractive Sector and Resource Governance 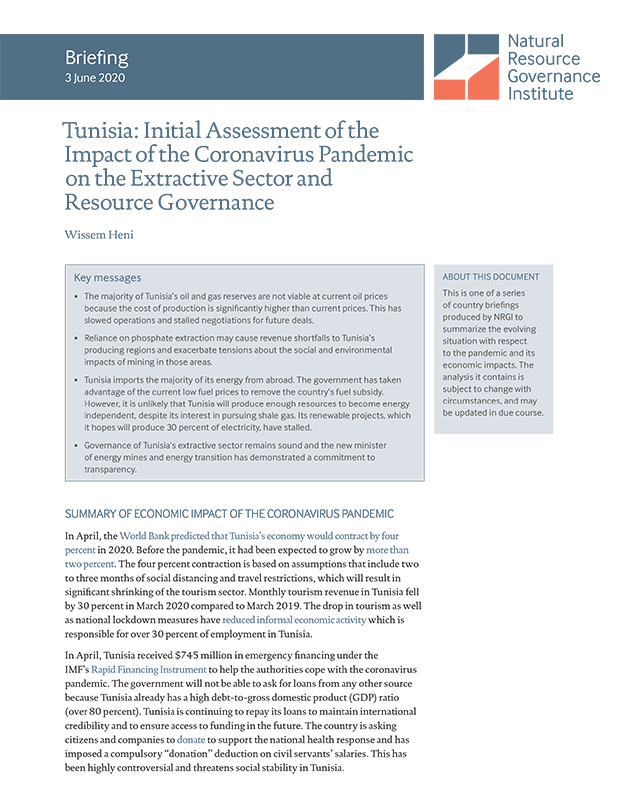 In April, the World Bank predicted that Tunisia's economy would contract by four percent in 2020. Before the pandemic, it had been expected to grow by more than two percent. The four percent contraction is based on assumptions that include two to three months of social distancing and travel restrictions, which will result in significant shrinking of the tourism sector. Monthly tourism revenue in Tunisia fell by 30 percent in March 2020 compared to March 2019. The drop in tourism as well as national lockdown measures have reduced informal economic activity which is responsible for over 30 percent of employment in Tunisia.

In April, Tunisia received $745 million in emergency financing under the IMF’s Rapid Financing Instrument to help the authorities cope with the coronavirus pandemic. The government will not be able to ask for loans from any other source because Tunisia already has a high debt-to-gross domestic product (GDP) ratio (over 80 percent). Tunisia is continuing to repay its loans to maintain international credibility and to ensure access to funding in the future. The country is asking citizens and companies to donate to support the national health response and has imposed a compulsory “donation” deduction on civil servants’ salaries. This has been highly controversial and threatens social stability in Tunisia.

According to officials within the Ministry of Energy and Mines, 70 percent of Tunisia’s existing oil and gas concessions are not economically viable at current oil prices. Existing oil and gas fields have continued producing but have reduced output due to the global drop in oil prices. For offshore oil and gas operations, the cost of production is significantly higher than the current price per barrel (production costs for offshore fields are between $80 to 100 per barrel). Planned new oil and gas fields will not start production as they are not economically viable at current prices. Potential investors have suspended negotiations but may resume them in the future if prices increase.

The Tunisian national oil company (NOC), Entreprise Tunisienne d’Activités Pétrolières (ETAP), is a major player in the country’s energy sector. The company is involved in 80 percent of oil and 70 percent of gas production, as a joint venture partner (association regime) or as permit holder (production sharing regime). ETAP lacks the technical and financial capacities to operate alone, and the economic impacts of the coronavirus pandemic will likely re-open the debate about the role of an NOC in the Tunisian context. The Nawara gas field, for which ETAP borrowed $75 million from the African Development Bank, commenced production in February 2020. However, the pace of production will decease because of movement restrictions linked to the coronavirus pandemic.

The mining sector was facing significant challenges even before the coronavirus pandemic. Phosphate extraction had been decreasing due to social protests in producing regions about the impact of mining on the environment and demands for employment. These protests started in 2008 and intensified after 2011. According to information provided by the Ministry of Energy and Mines, the pace of extraction is lower than expected. According to industry sources, phosphate exports in the first four months of 2020 were not significantly down on the same period last year but it appears that the exports were of previously extracted material.

The coronavirus pandemic will exacerbate the social and environmental issues facing the mining sector, particularly in the Gafsa mining basin. The region’s reliance on the phosphate industry as its main employer means that it is highly vulnerable to any significant reduction in phosphate production. Moreover, social protests may lead to the state-owned Companie des Phosphates de Gafsa (CPG) to maintain or expand employment opportunities in an unsustainable manner. In 2019, Reuters reported on thousands of “ghost workers”—people on company payroll who don’t actually work at the company—at CPG.

Tunisia is not a natural resource-dependent economy. However, a reduction in revenues from the extractive sector will compound the economic challenges the country is likely to face due to the coronavirus pandemic’s impact on tourism and the informal sector on which many Tunisians rely for their livelihood.

Tunisia imports 75 percent of its energy from abroad, which negatively affects the country’s balance of trade. In April, the government, taking advantage of the low international oil price, took steps to remove the country’s fuel subsidy. By removing the subsidy when the price is low, Tunisians do not immediately see any steep rise in the cost of fuel, but if the international oil price rebounds, this will happen. In response to protests about the removal of the subsidy, the government has reiterated its determination to achieve energy self-sufficiency by revising parts of the hydrocarbon code and granting incentives to encourage private oil and gas investors to operate in Tunisia. Tunisia’s fiscal regime for hydrocarbons is unattractive to investors; the government’s take exceeds 75 percent, while the geologic potential is limited and the cost of exploration and production in high.

The government has also said that it will adopt a new legal framework for the non-conventional hydrocarbon sector (mainly shale gas). While investors had previously shown some interest in Tunisia’s shale gas, the current economic turmoil, low gas price and the fact that many investors will have to tighten their belts, mean a legal framework may not be sufficient to induce investment going forward.

Additionally, Tunisia is committed to producing 30 percent of its electricity from renewable energy sources by 2030. However, the coronavirus pandemic has stalled renewable projects. Government officials have expressed concern that the 30 percent target is no longer achievable within the timeframe.

Tunisia has not seen any rollback on transparency during the coronavirus pandemic so far. On the contrary, the Ministry of Energy and Mines has proactively disclosed information through the ministry’s Facebook page, where officials have provided updates on issues such as production and the price of fuel, especially the level of subsidies. The new minister of energy mines and energy transition, appointed in February, has a good track-record on transparency. While holding the same ministerial post for seven months in 2016, he oversaw the initial publication of all oil and mining contracts. His re-appointment as minister was in part a result of calls from civil society.

The Extractive Industries Transparency Initiative (EITI) process has been suspended in practice because it has not been possible to hold meetings due to the lockdown and restrictions on movements. The EITI is a global organization that publishes annual government- and industry-based transparency reports on the oil, gas and mining sector and makes suggestions about how countries and companies can improve their extractives governance.

In an unprecedented transparency and governance move, in May, the government announced a participatory general audit of the hydrocarbon sector. The mission will include representatives from civil society alongside the official audit bodies.

The energy sector is in the spotlight as the coronavirus pandemic has impacted both the extractive sector and Tunisia’s fuel subsidy and overall energy sector policies. The country is unlikely to see the hoped-for additional investment in oil and gas because of low global oil and gas prices and the knock-on impact on investors’ decisions and bottom line (factors compounded by Tunisia’s fiscal regime for oil and gas). Tunisia’s strategy to pursue shale oil and gas seems high-risk, given the limited likelihood of investors and the environmental concerns already expressed in Tunisia about such moves. In light of the challenges facing any effort to exploit shale gas, the government should consider doubling down on its 2030 renewables target.

The time is ripe for Tunisia to review its energy strategy and examine whether domestic energy production can move away from its focus on hydrocarbons. This should include a clear-sighted review of the value and role of ETAP.

The ongoing challenges in the Gafsa mining basin requires a comprehensive and consultative approach, one that reduces the unsustainable reliance on the phosphate sector for livelihoods.

Tunisia: Updated Assessment of the Impact of the Coronavirus Pandemic on the Extractive Sector and Resource Governance